Tha Natural has had quite a few accomplishments in the last year or so. He has a hit song with Kevin Gates ("Gave Me Life"), hailed as a favorite among DJs and fans alike. He's been front and center for countless interviews and appearances. He's even hosted events, attended SXSW and appeared on several reality shows. Suffice it to say, he has raised the bar and has given "entrepreneurship" a whole new meaning. 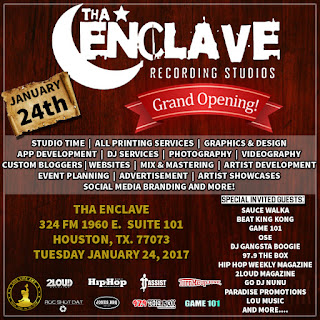 But one of Tha Natural's proudest accomplishments to date is his creation known as "Tha Enclave", a 3200 square foot luxury recording facility that houses not only a state of the art recording studio, but in-house services that will assist with anything an entertainer may need, whether that is promotional and marketing material and assistance, apparel printing, social media marketing, photography, videography, event planning services, and so much more.

The Grand Opening of Tha Enclave is tonight from 7-11 p.m. Central Time. Countless individuals are expected to attend the event, from celebrities to members of the media and the Houston, Texas business community. Less than seven weeks ago, Tha Natural began the process of remodeling what was a plain office building. He began bringing his dream of a one-stop shop combined with convenience and luxury to fruition so that Texas' entertainment society could partake of the services he offers to assist in bringing their dreams together as well. He has certainly done that. Tha Natural turned a slightly aged, empty office space into a posh, contemporary space where entertainers and musicians can finely hone their craft, while enjoying the comforts of an upscale bar and entertainment complex. 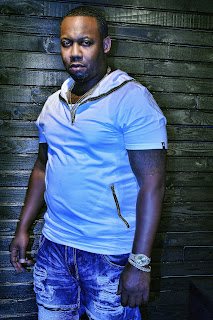 Be sure to check out Tha Natural's music and follow his career, as well as that of his company (Loss Life Entertainment) and its subsidiaries, particularly Loss Life Apparel. His story is one of success and redemption and it is to be savored. We don't often see victories and accomplishments such as those - and that is what makes seeing Tha Natural winning, even better.

Check out some press on Tha Natural: 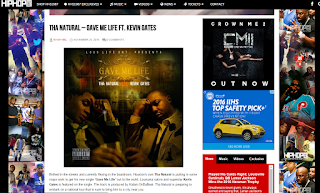 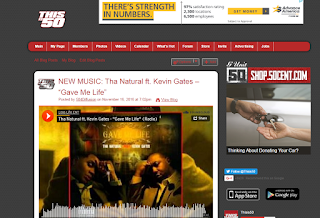 Be on the lookout for a feature in the Houston Chronicle's Business section!
Posted by Tha Natural at 8:29 AM

After being away for over two decades, Houston based rapper Tha Natural bounced back with a ton of material for his fans, including "Gave Me Life". This @KalaniOnTheBeat produced track featuring Louisiana's own Kevin Gates is a monster! Tha Natural uses his unique storytelling ability to help us to see into his childhood, and he then brings us forward to adulthood, where he experienced an unfortunate event that caused him to be incarcerated for over 22 years. Tha Natural used that time to write not only lyrics, but a business plan that, upon his release, helped him to become a true businessman in every sense of the word. He owns his label, Loss Life ENT, and is putting in the necessary work to make certain it becomes one of the foremost independent rap labels in the country. "Gave Me Life" can be purchased from any major digital music retailer, including iTunes, Google Play and Amazon, and it can be streamed on Apple Music, Spotify, and more. Follow Tha Natural on Instagram - @iamthanatural